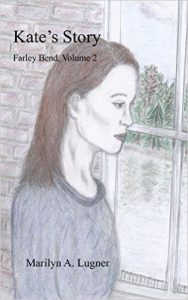 If I found more time to write, I could add titles to Amazon more often and it would be easier to get the details right the first time.  Pete pointed out a few days ago that my Amazon author page included Farley Bend (Volume I), but not Kate’s Story.  How did that happen?  I expect I missed a checkbox or some other detail.

I think I’ve now dotted the i’s and crossed the t’s (or crossed my eyes, or something like that!)  My Amazon author page now includes both titles.  Hooray!  This is more links and graphics than I’ve included on any other page – one more skill I hope to build with additional practice.

Over the weekend we enjoyed a harbor cruise in Boston.  The narrator was full of trivia bits and anecdotes regarding the big city, and did a fine job mixing facts and entertainment as he spoke for nearly an hour and a half about the city’s landmarks and history.

When we approached the North End, he talked for a few minutes about the Great Molasses Flood of 1919.  I had a vague idea that a major molasses spill took place nearly a hundred years ago, but didn’t have details at my fingertips.  The idea of a 25-foot wave of molasses rushing down the street at 35 miles per hour is nightmare fodder, for sure.  Imagine, too, how sticky the whole area must have been in the aftermath of the wave.  I have enough fun scrubbing out measuring cups after I mix up cookie dough.  Multiply that residual stickiness by over two million gallons of molasses…

The thing that sticks in my mind, though, is the term the tour guide came up with to describe the day – ‘molassacre’.  Twenty-one people died, which is enough to qualify the event as a massacre.  I must admit I hadn’t considered how dangerous a baking ingredient could be.  I will treat the bottle of Crosby’s in my cupboard with more caution and respect in future.

My brother Ken was one of the first to volunteer to proofread ‘Farley Bend’.  When I forwarded the file to him, I wondered how much of himself he would see in Emily’s brother Ed.  Many of Ed’s character traits are based on Ken, so I often imagined Ken as I wrote about Ed.

Ken and I discussed ‘Farley Bend’ quite a lot, particularly after he started reading the draft  Imagine my dismay when Ken said, “I’m mired in chapter 16.”  Dread.  Shame.  Panic.  Ok, maybe not panic.  But still… my masterpiece wasn’t even good enough to give Ken something charitable to say while he was reading the proof?

He immediately clarified his statement.  Mired in Chapter 16 because of things he had going on, not because Chapter 16 was a pit of paralyzing prose.  The story wasn’t dead in that chapter, it was simply that he had many other things demanding his time and attention.

In the months that followed Ken’s mired comment, we have referred to it often.  It is part of our history now, and will likely be discussed for years to come.  Will Ken volunteer to proof Volume II?  Probably.  As long as I promise that Chapter 16 will be very well written.

I know I’ve used the wrong word and conveyed the wrong message many times.  One of the reasons I prefer email to telephone conversation is the built-in safeguard of seeing my words take shape on the screen before I share my views.  Thus I have an opportunity to edit unfortunate or inaccurate wording.  This does not prevent me from misaddressing the occasional email message … but that’s a story for another post.

What’s in a name, anyway? Several people have asked where the name ‘Farley Bend’ came from.  The answer: I don’t know.  I was pondering the idea of writing a book during my morning drive, and somehow Farley Bend was there.  When I arrived at work I wrote it down on what I expected to become a list of fictional Maine towns.  At the end of the day I brought the list home; it still contained just one entry.

Farley Bend?  All right.  Before settling on the name, I did some internet searches.  I didn’t think I’d ever heard of a Farley Bend in Maine.  I learned that there is a real estate broker named Farley in Bend, Oregon.  That didn’t sound close enough to cause problems.

I wanted to name my main character Emily, because I like the name.  Allen seemed like a good match for Emily – short enough to balance well, and pleasant.  Imagine my surprise when one of my earlier readers told me she has a relative named Emily Allen!  To my knowledge I’ve not met an Emily Allen, though perhaps one day I will.

I surveyed a number of people when I started creating the cast of characters to work at the Farley Bend Mill.  I knew I wanted first names that could have been common during the late 1930’s, and I didn’t want to use only names of friends and family who lived during that era.

Until I started working on this post, I didn’t realize that I used first names of people I liked for many of my characters and selected first names of people I didn’t know for the villains.  I don’t know anybody named Amos, nor do I know anyone who shares the first name of the villain in Volume II.  There are a few names I’m intentionally avoiding because I don’t want to spend any more time than strictly necessary with mental pictures of those individuals.

Writing as therapy?  Probably.  It’s been an interesting experiment, anyway!

I spend a significant amount of time in the car each work day – nearly an hour driving to work, and of course a similar amount of time going home again.  Since I travel with a smart phone anyway, why not see if I can spend that time working on Volume II?

Last week I downloaded a text-to-speech app for my phone.  In theory that means I can talk to my phone and have my words turned into text that I can then import into a word processing program and add to my book.  Beautiful plan, isn’t it?

Here is an excerpt from Wednesday’s experiment:

“Ok 33 chapter 1 don’t know how will Bible try as it picked up by voice today document Lorex killer it I want they are fired list they know about it baby truck up the background sure let’s do it later 30 I want to break it apart art I need a doctor single where the F you think whitney.  Help us horse on everybody will will but they will actually be what’s going on…”

Believe it or not, that doesn’t really resemble what I said.  It’s surreal enough that I don’t think reading it helps me figure out where I was going at all.  Back to the drawing board!

In the end of October 2013 I was reminded that November is National Novel Writing Month. Hearing about it with a whole week to figure out where to begin and what to write about – amazing! Since I drive nearly an hour to work each morning I have time alone to ponder such things. What if part of the story was a young woman with nightmares? What is she dreaming about? And why? Can she figure out how to make the nightmares stop? And where does she live?

Farley Bend was born. Following the classic ‘write what you know’ advice, I decided to set the story in a small town in Maine. Then began the adventure of populating my small town. Who lives there? How did they get there? Who is important to the story I’m telling right now? That’s when I suspected that Farley Bend was a lot more than one novel worth of material. I could spend the first book finding out about the nightmares, then decide whose story to learn about in Volume 2. What fun!

Why write about November in June?  Because the older I get, the faster time flies.  November is just around the corner.  Have you figured out what you’d like to write about?  Check this out for inspiration:  http://nanowrimo.org/